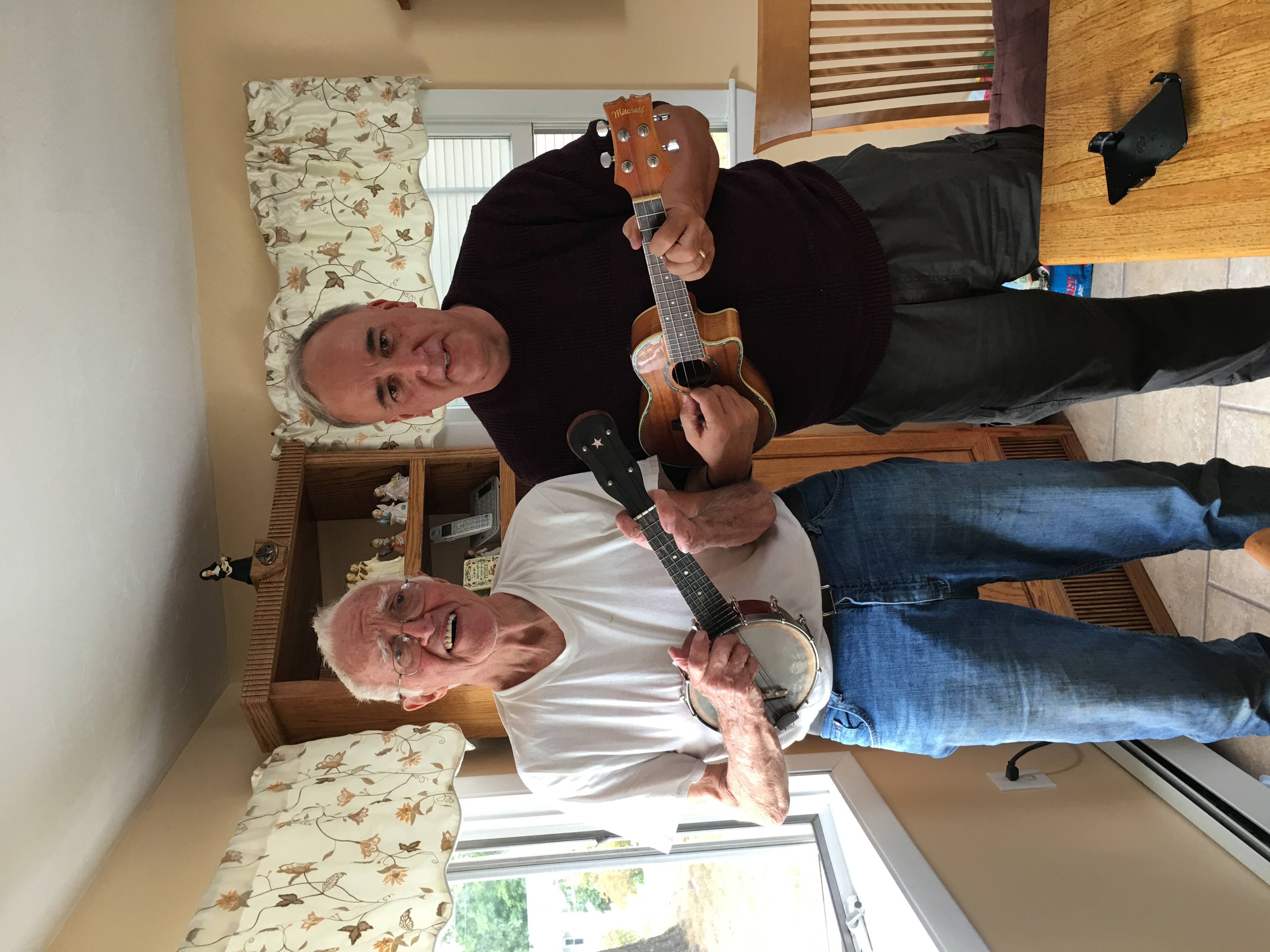 This blog post is devoted to the memory of my Dad, who passed away on May 15th, 2022 due to complications from Alzheimer's Disease. It is designed to serve as a companion to the tribute episode I did to help honor his memory.

May 15th, 2022- a day I will remember for the rest of my life. It was on this day that our patriarch, our hero, our mentor, passed away. My Dad as many of you know fought a long and heroic battle with Alzheimer's Disease. A cruel, degenerative disease took away my Dad's brain, his memory, and his overall well being. But it didn't take away the person he was. Even in the grips of this terrible disease, his personality still shined through, in spite of the occasional tough days that he had. I remember days, even near the end, that he still managed to be happy and outgoing, especially with the female nurses that would come and visit with him.

How can you begin to describe a man's life who literally never had a bad word to say about anyone, a man who truly never had an enemy in his life? I'm sure you'll agree that it is a daunting task to say the least. My Dad loved people. It was a joy to him to interact with people. As I mentioned in the podcast episode, he really made you feel special. He cared about you, he cared about what you were doing, and what concerned you. The way my Dad listened to people and made them feel special was legendary. But don't take my word for it. Talk to any person who had the pleasure of meeting him. I learned so much about human relations from him, and I try to emulate his ways in that regard wherever I go. Love everybody. And if you can't do that, then like everybody. And if you can't do that, then at the very least try to understand them. That was Dad.

The other thing that Dad loved was music. It was his passion in life. That was his way of connecting and relating with others. And, man, was he good at it. Dad was born with a birth defect on one of his hands. Under normal circumstances, it would be damned near impossible to play a guitar with that handicap. But Dad not only found a way to overcome it, he thrived. Nothing could stop him. It didn't matter where we went- whether we hit the road somewhere or had one of our legendary parties at 139 Howland- every social situation was an opportunity to play music and have fun with people. The neighbors and other passers by must have chuckled driving by our house when we had one of those parties- cars practically parked down the street with people who wanted to partake in the fun. Music was around us all the time- we were inundated with it- everywhere. We all learned about its value and friendship from Dad.

He was one of the most brilliant people I've ever known. His intelligence and work ethic were the stuff of legends. He had all kinds of cool jobs- from jobs in the music industry (ARP synthesizers) to Hasbro (he was one of the co-creators of the children's toy Weebles)- to the job he eventually ended his career with- Baird Atomic of Bedford, MA, later relocating to Dallas for the last 15 years- designing and selling night vision goggles for the US military, a job that required him to travel all around the world with a salesman, selling those products to allies and war torn countries that desparately needed them to gain an advantage for their military. His work ethic is something I've taken with me into my own broadcasting career. The importance of preparation. The importance of doing your very best, and producing results of excellence. And not just once in a while. Dad taught me that the commitment to excellence needs to happen each time, every time. In other words, it needs to be a habit. That is why my philosophy now is that I will not be outworked. You need only to go back to my newspaper delivery days to see where that groundwork was laid.

The only thing Dad and I ever differed on I guess was the concept of time. When we went somewhere, whether it be a family event, or any other type of social commitment we had, Dad had the laid back philosophy of "we'll get there when we get there." Making pit stops for donuts, gas, and ice, or whatever, Dad was on his own time clock. He embraced the family approach of " Play it by Ear" or "PIBE" as we sometimes call it. It used to drive my Mom crazy. As for me, it never really mattered much to me back then- but nowadays, I am the complete opposite. I have a sacred relationship with time- blame it on the sportscasting business which I've been a part of for the last 27 years- my feeling is that if you have to be somewhere at a certain time, then you need to be there on time. I am at the venue I am broadcasting at three hours before the game starts. Always. If I have an appointment, I am always there 15 minutes before. I'm never late for anything, whether it's personal or professional.

As you might imagine, there are a ton of stories that I could tell about Dad. The time he and my brothers goaded me into eating a 64 ounce steak when we visited him and Mom in Texas once. The time he let me use his old Chevy to go to work at Babson College- and the whole damned rear axle fell off of it- and he just laughed it off with me. The time- the ONE AND ONLY time- he hit me as a kid- and then when it was over asked my Mom to come upstairs and check on me. The time he went to a Red Sox game with Mom one night and felt guilty about it- knowing how much I loved sports- so he bought me some souvenirs, a scorebook, after the fact. I remember it was a game against Baltimore- and he told me he marveled at a home run Reggie Jackson hit in the game.

One of my favorite stories was the time we went to a Patriots game together at the old Schaeffer Stadium. It was a cold, miserable day. A day that you just wanted to stay inside. I'm not sure how we got tickets for the game, Dad probably bought them- the Patriots were terrible back then. Anyhow, as the game went on it just got colder and colder. I think it also began to rain and snow. I remember Dad pulled out this tarp to cover us and keep us warm. Knowing how much I loved sports, Dad saw the enjoyment I was getting out of it- and having the option to leave the stadium early, he refused to. We stayed until the end of the game. The thought crossed my mind- "Why doesn't Dad leave the game if he's cold? " And then at some point- maybe at that time, maybe later, I don't know- it dawned on me- He didn't leave because he saw how much fun I was having and didn't want to take that away.  That was Dad at his core- his very essence- he deeply cared about people and their happiness and always thought about others and their interests above his own.

His six grandkids were so unbelievably special to him- he loved each and every one of them endlessly. I truly believe that he hung on an extra day at the end because he didn't want to interfere with his grandson Colin's wedding. Colin, Emily, Matthew, Bailey, Meghan, and Colleen were his light and joy. He used to teach them how to make pizzas as only Dad could.

As for me, he always supported me in my broadcasting, especially later on in life. And he supported me in some interesting life decisions- taking my first flight alone, making the journey out to California to strike out on my own in 1991- always imparting his wisdom but at the same time encouraging me, and telling me to have fun along the way.

And a shoutout to my Mom, lest I forget. She was his everything. Right up until the very end. A true warrior. She was his nurse, his soulmate, his best friend. He acknowledged her and appreciated her right to the end, and I mean the very end- although there were some unbelievably stressful times for her. But she never lost sight of the fact that it was always the disease and not him. And he knew it on some level, in spite of all his difficulties. Almost 60 years married, and 62 years together total. Quite the special run.  And on my end, I'll always remember that Dad and I never lost that connection and bond, even though he couldn't remember who I was, only referring to me as " The Big Guy." Right to the end.

To wrap it up, I think the lyrics from the old Dan Fogelberg in the song " Leader Of the Band", sums it up best:

The leader of the band is growing old and tired and his eyes are growing old...... But his blood runs through my instrument and his song is in my soul.... My life has been a poor attempt to imitate the man..... I'm just a living legacy, to the leader of the band.... I thank you for the music and your stories of the road... I thank you for the freedom when it came my time to go.... I thank you for the kindness and the times when you got tough..... And papa, I don't think I said "I love you" near enough (Editor's note- I constantly told him I loved him at the end of his life, kissing his forehead, calling him a rock star, so no regrets there.)

Dad, I love you. You'll never be forgotten, by me, or anyone else. I hope you're enjoying your time in heaven, enjoying a cold "frosty" and hanging out with Uncle Mick, Uncle Law, Aunt Loretta, Nana, Grandpa, and Kris, among others. God Bless. We'll keep the music going. Until we meet again.

2022 In Review- A Farewell to A Very Challenging Year

Happy New Year everyone!  As we embark on another journey to end one year and begin another, I'm here to say that I am welcoming 2023 as I have nev… 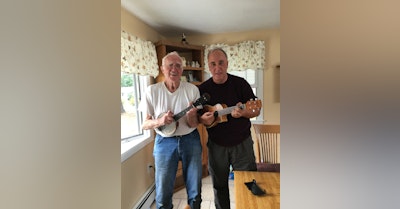 An expansion on Alzheimer's Disease

You might recall a few weeks ago in my podcast episode I touched on a few challenges I am facing right now. One of those is the effects of being a caregi…

Email has been submitted.